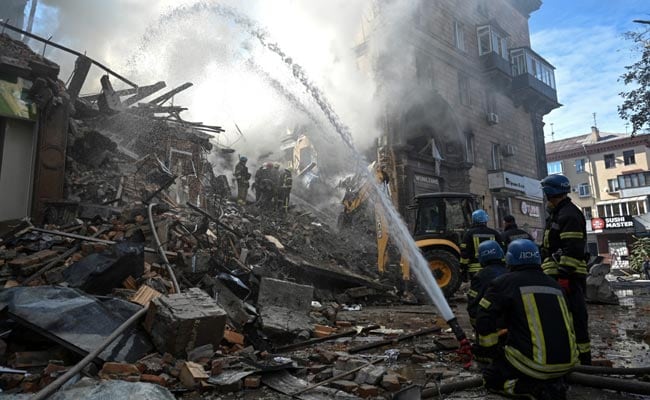 US officials said thay they did not know whether Russia has received the ammunition. (File)

The United States said Wednesday that North Korea is sending a significant amount of artillery ammunition to Russia for its war in Ukraine, under cover of shipments to the Middle East or Africa.

White House national security spokesman John Kirby said US officials did not know whether Russia has received the ammunition, but were trying to monitor the shipments.

US information indicates that North Korea “is covertly supplying Russia’s war in Ukraine with a significant number of artillery shells, while obfuscating the real destination of the arms shipments by trying to make it appear as though they are being sent to countries in the Middle East or North Africa,” Kirby told reporters.

“We are going to monitor whether the shipments are received,” he added.

In September Pyongyang denied a White House claim that it was planning to provide ammunition to help the Russian military replenish its stockpiles, which have been severely depleted by the now eight-month-old war.

“We have never exported weapons or ammunition to Russia before and we will not plan to export them,” an official at the North Korean defence ministry’s General Bureau of Equipment said in a statement carried by the official Korean Central News Agency on September 21.

But Kirby said the US believes a large number of artillery shells have now been shipped, enough to help Russia prolong the war but not enough to give it an advantage over Ukrainian forces, which are being supplied by the United States and NATO allies.

“It’s a significant number of artillery shells. This is a sign not only of the degree to which North Korea is willing to bolster and support Russia, but a sign of Russia’s own defense article shortages and needs,” he said.

He said Moscow has been forced to seek arms from North Korea and Iran because of global sanctions that have limited Russia’s ability to restock arms warehouses on its own.

Iran has sent its self-detonating drones to Russia, which has used them to attack and disable Ukrainian infrastructure.

The Kremlin has also reportedly sought to acquire short-range ballistic missiles from Iran, but Kirby said that has not been confirmed.

Kirby would not say how or by what routes the North Korean ammunition is traveling.

He said the US would consult allies and parters, especially at the United Nations, on what measures might be taken.

Kirby declined to answer questions as to whether the United States would interdict or seize the weapons supplies from Iran and North Korea.

The US Navy and allies working in the Middle East have stopped small shipments of arms from Iran to conflicts in Yemen and eastern Africa.

Style And The City: Priyanka Chopra’s OOTD Was This