The US administration is likely to boycott far-right politician Itamar Ben Gvir should he play a part in Israel’s incoming government, according to a report on the Axios news site Wednesday.

Citing two anonymous US officials, the report said the administration will work with Likud leader Benjamin Netanyahu’s expected future government, but may decide to refuse to deal directly with the far-right firebrand.

The site also reported that US Secretary of State Antony Blinken and National Security Adviser Jake Sullivan warned President Isaac Herzog during his visit to Washington last week that the US may refuse to cooperate with “specific politicians” — a likely reference to Ben Gvir.

After winning 14 seats in Tuesday’s election — with 87% of the vote counted — the far-right Religious Zionism-Otzma Yehudit alliance led by Bezalel Smotrich and Ben Gvir was expected to be a senior partner in Netanyahu’s future government.

Responding to the report, Ben Gvir’s Otzma Yehudit faction accused the Israeli left of being involved in the matter.

“The undemocratic campaign that the Israeli left has been pushing continues,” it said in a statement, though it did not clarify how the left had been involved in the ostensible statements of US officials. “We know very well who in Israel is trying to incite the Americans to interfere in Israeli democracy and what their interests are.”

Ben Gvir is a self-described disciple of extremist rabbi and former MK Meir Kahane, whose Kach party was banned and declared a terror group in the 1980s in both Israel and the US. Like the late Kahane, Ben Gvir was convicted in the past of supporting a terror organization, though he insists he has become more moderate in recent years and does not hold the same beliefs as the Kach founder.

Meanwhile, former US ambassador to Israel Martin Indyk said Wednesday that a future Netanyahu government could have a “rocky” relationship with the Biden administration.

Indyk served as ambassador from 1995-1997 and again from 2000-2001. He also served as the US envoy to Israeli-Palestinian peace talks during the presidency of Barack Obama, which failed to yield results. 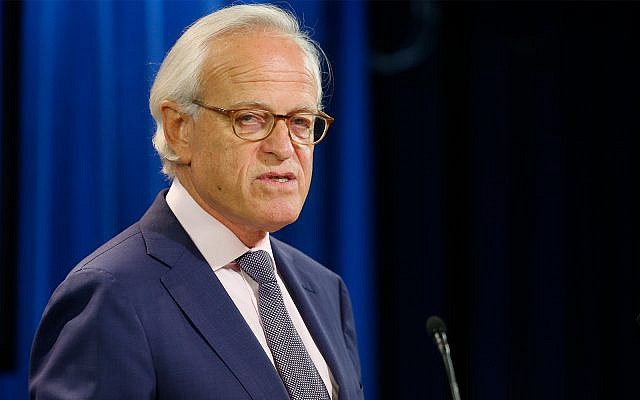 “The Biden administration doesn’t have a good history of relations with Netanyahu, and if he takes on these far-right extremists into his government and into his cabinet, then I think we’re in for a rocky road,” Indyk said in remarks broadcast on Channel 12.

Obama, Netanyahu and their respective staff quarreled regularly during their overlapping eight years in office, as Obama sought to advance diplomatic agreements between Israel and the Palestinians and between Iran and world powers — both of which were largely opposed by the then-premier. However, Biden’s ties with Netanyahu are warmer.

Current US Ambassador to Israel Tom Nides chose to praise the Israeli electorate Wednesday for voting in large numbers — the highest voter turnout since 2015 — while adding that: “It is too early to speculate on the exact composition of the next governing coalition until all the votes are counted.”

Some 500,000 “double envelopes” containing ballots cast by soldiers, prisoners, diplomats and people who could not reach their designated polling stations are still to be counted, beginning at 11 p.m. Wednesday night.

“I look forward to continuing to work with the Israeli government on our shared interests and values,” his statement said. 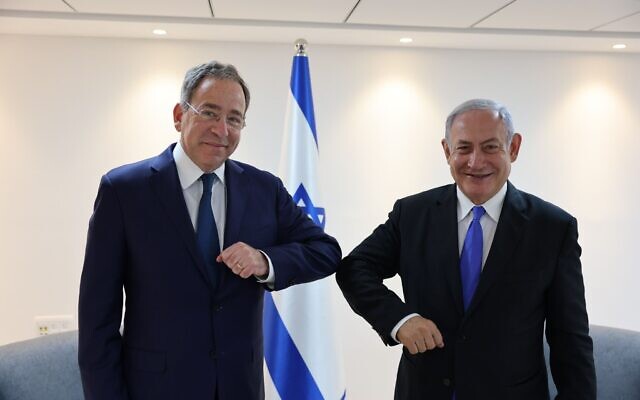 US Ambassador to Israel Tom Nides (L) and opposition chairman Benjamin Netanyahu meet in the Knesset on December 9, 2021. (US Embassy in Israel)

As the final ballots in the Knesset election are being tallied, all signs point to a resounding victory for opposition leader Netanyahu and his bloc of right-wing, far-right and religious parties, a result that would end a political crisis that has seen five general elections held in under four years.

With some 86% of the votes counted, the bloc of parties loyal to Netanyahu was predicted to win 65 seats in the 120-seat Knesset, a comfortable majority.

Jacob Magid and Michael Bachner contributed to this report.

We’re really pleased that you’ve read X Times of Israel articles in the past month.

That’s why we started the Times of Israel ten years ago – to provide discerning readers like you with must-read coverage of Israel and the Jewish world.

So now we have a request. Unlike other news outlets, we haven’t put up a paywall. But as the journalism we do is costly, we invite readers for whom The Times of Israel has become important to help support our work by joining The Times of Israel Community.

For as little as $6 a month you can help support our quality journalism while enjoying The Times of Israel AD-FREE, as well as accessing exclusive content available only to Times of Israel Community members.

Thank you,
David Horovitz, Founding Editor of The Times of Israel

Already a member? Sign in to stop seeing this