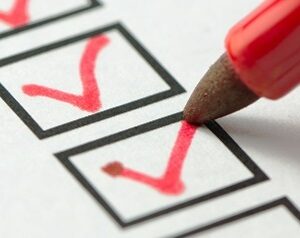 In 1971, Hunter S. Thompson wrote of the Circus Circus Casino, “The Circus-Circus is what the whole hep world would be doing Saturday night if the Nazis had won the war. This is the sixth Reich.” It may not appeal to sharp-dressed fascists these days, but walking its halls in 2022 does give strong January 6 reunion vibes. Blue striped perversions of a flag, “Don’t Tread on Me” shirts, and Punisher logos weave between slot machines attached to yard-long margaritas. It’s not, by any means, the whole clientele at the hotel — but enough that you understand why Thompson would only enter the place after a comforting hit of ether.

Toward the northern border of the Strip, Circus Circus sits in stark contrast to the glittering modern resorts to the south. And the neglect plays no small part in the crowd it can attract.

But it’s right next door to the Resorts World complex hosting the Association of Corporate Counsel Annual Meeting, and it’s cheap so Circus Circus served as Above the Law’s Vegas outpost for a few days last week.

Speaking of things that were left to decay until overtaken by rot, the United States system of corporate governance! How’s that for a transition?

Despite serving as the economic engine of the world, years of mealy-mouthed Democratic leadership and actively kleptocratic Republican oversight have left American corporate regulation out of step with the challenges facing the market.

At least the SEC is playing catchup. Gary Gensler plans to bring US regulation into the 21st century and is making some progress. One practitioner noted that last year was the most active year for the SEC in his 30 years of practice. The SEC has new rules for reporting cybersecurity incidents, increased cooling off periods governing trades, and new ESG disclosures coming.

But the in-house lawyers in attendance seemed relatively unperturbed to hear about these new rules. Because, in most cases, they were already in compliance to meet strictures placed on their companies by investors, or the exchanges, or Europe. To some extent, the SEC depends on these outside actors to accomplish its goals. The NASDAQ rule requiring listed companies to have at least two diverse board members earned SEC approval, but wasn’t something the SEC could pull off by itself.

Don’t worry though, because we’re a trash country there are already attempts to undermine the exchange:

Board diversity regulation critics’ arguments are starting to shape in their lawsuits to challenge the Nasdaq’s rules. The stock exchange’s diversity rules violate federal securities laws and directors’ and companies’ First Amendment rights, according to the organizations that are challenging the changes—Alliance for Fair Board Recruitment and the New Civil Liberties Alliance. The organizations said they also are on the lookout for similar points of contention in the SEC’s rules.

“Our government must stop the sordid, unconstitutional business of dividing Americans into racial and other identity boxes,” said Edward Blum, president of the Alliance for Fair Board Recruitment.

It’s impressive that Ed Blum has enough time to take a break from assaults on affirmative action to launch assaults on financial regulation. Turning shadowy contributions from racist plutocrats into litigation is truly a full-time job!

But from privacy to diversity, the pressure has come from the outside.

This came up again while chatting with Mark Robertson of Navex, a government risk and compliance software solution. Serving 91 of the Am Law 100, Navex offers a range of services from hotline and incident management to compliance with workplace harassment laws to cybersecurity risk management. But when we talked, ESG disclosure management and privacy took center stage — two areas where the EU and investors have taken the lead. Robertson also highlighted supply chain oversight, another area where the EU is active in rulemaking.

Sometimes it takes a boost from the outside to resuscitate a failing institution. On that note, Circus Circus got bought in 2019 and the new ownership has plans to renovate the casino. Maybe, like the regulatory environment, some new blood can help clean it up.

As one of the executives behind the new Circus Circus put it, they plan to “bring back some of the glory days.”

Joe Patrice is a senior editor at Above the Law and co-host of Thinking Like A Lawyer. Feel free to email any tips, questions, or comments. Follow him on Twitter if you’re interested in law, politics, and a healthy dose of college sports news. Joe also serves as a Managing Director at RPN Executive Search.