Turmoil and transition: Iraq twenty years after the invasion The Atlantic Council’s Iraq Initiative held a two-day conference on “Turmoil and transition: Iraq twenty years after the invasion.” The event took place from Tuesday, October 25, through Wednesday, October 26, 2022. The conference brought together leading experts and senior-level American and Iraqi policymakers to explore Iraq’s past two decades and analyze the key challenges and opportunities confronting future generations in Iraq.

The conference presented a series of panel discussions, fireside chats, and keynote speeches. These explored questions on Iraq’s security landscape, its regional role in mediation and foreign policy in general, Iraq’s hydrocarbons sector and efforts to manage climate change and the challenges it has faced in its democratic transition.

Iraq in the Region

Energy, Economy, and the Environment

Nour Alhajjeh and Madeline Hart are Young Global Professionals with the Middle East Programs at the Atlantic Council. 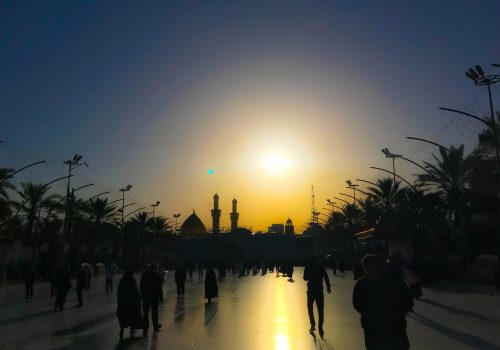 Optimizing and aligning the US-Iraq relationship 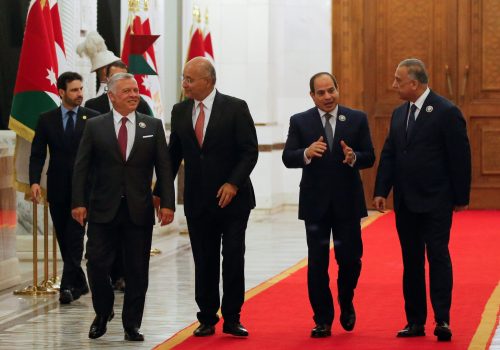 Since 2019, Egypt, Iraq, and Jordan have held multiple summit meetings to discuss trilateral agreements to formalize and deepen economic integration. By cooperating among themselves, the three countries can represent a united political and economic front. This report explores the potential benefits and pitfalls to avoid from the perspective of each country: Egypt, Jordan, Iraq.

Image: A demonstrator waves an Iraqi flag as another gestures during an anti-government protest in Baghdad, Iraq May 25, 2021. REUTERS/Thaier Al-Sudani