US Fed Meet: How the Market Could React to 75 Bps Hike? As numbers in the US are still over 8%, it’s no surprise that the US Fed would likely be going for a in today’s FOMC meeting. An increase of 75 bps rate hike is highly expected which would be a historic moment in the history of the US economy as the Fed has never gone for a 4-time 75 bps rate hike.

As the markets have almost priced in the upcoming rate hike, Jerome Powell’s commentary would be something that could be a spoiler to the bulls’ party. What the market wants to know is what the Fed is thinking about the further rate hike trajectory. Many times in the last few weeks, Powell had been quite assertive in its public appearances regarding the Fed’s hawkish stance. It is very clear that the Fed is not going to stop until the effects of the rate hike are visible in inflation numbers 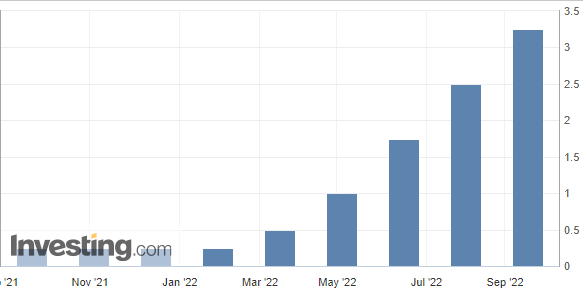 Therefore, a 75 bps hike is not expected to surprise the market much (which generally is a bad sign, but not this time). However, if the market sees some sign of continued aggressiveness in Powell’s commentary then it could be troublesome for the bulls. What the Fed is trying to do is slow down the job growth in the economy with its rate hikes to contain inflation. It will definitely cause some pain to Americans which Powell had also admitted in his previous meeting. Despite a 300 bps rate hike this year, job growth is not slowing down. As per the latest data from The US Bureau of Labor Statistics, job openings in September 2022 increased to 10.7 million, from 10.3 million in August 2022.

As the economy shows signs of calming down, with some job losses (unfortunately), it would lead to the tapering of the Fed’s hawkishness, which is what the world wants to see. Hence, negative news for the economy would be positive news for 6 months down the line. That is why I am not expecting such an aggressive rate hike to disappoint the market. It has also happened before with the last month’s CPI of 8.2% which is excessively high by any means (& was even higher than the expectation of 8.1%), but the market shot up aggressively because it was the third downtick from a multi-year high of 9.1%, hence eventually a piece of good news.

On the other hand, if Powell gives some hint towards a downtick in the next rate hike in December 2022, then it won’t be surprising if the continues its uptrend towards the new all-time high, along with the rally in the US markets.

What would be ultra bullish for the markets is a 50 bps hike. I know that has an almost negligible possibility, especially when inflation is still high, but that’s a massive risk for the bears.