US jobs growth set to have cooled for third consecutive month US jobs growth is expected to have cooled for a third consecutive month, in an early sign that the historically tight labour market is starting to feel the effects of the Federal Reserve’s aggressive efforts to curb demand.

The economy is forecast to have added 200,000 positions in October, according to a consensus estimate compiled by Bloomberg, down from 263,000 in September and 315,000 in August. In July, payrolls swelled by more than half a million.

Despite these gains, the unemployment rate is set to have risen back up to 3.6 per cent, just above its pre-pandemic low.

The data will be released by the Bureau of Labor Statistics at 8:30am Eastern Time on Friday.

The red-hot labour market has long been a source of discomfort for the US central bank, which is actively trying to restrain economic growth in order to bring decades-high inflation under control. Acute labour shortages have helped to drive up wages, as employers seek to fulfil strong demand for workers, adding upward pressure on inflation.

Fed chair Jay Powell described the labour market as “overheated” on Wednesday, at a press conference following the central bank’s decision to lift the federal funds rate by 0.75 percentage points for the fourth time in a row. Citing recently released data that showed both labour costs steadying and job vacancies unexpectedly climbing, he warned he does not “see the case for real softening yet”. 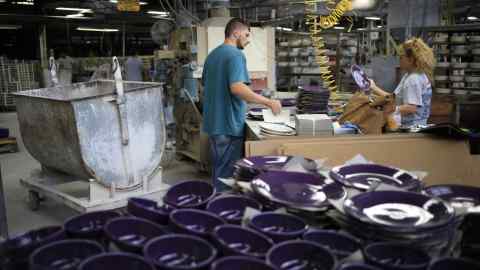 The share of Americans either employed or seeking a job — known as the labour force participation rate — is not expected to have improved in October, steadying at 62.3 per cent. Wages are also forecast to have risen 0.3 per cent, matching September’s increase but slowing the annual pace to 4.7 per cent.

Powell on Wednesday cautioned that wages were “flattening out” at a level that is “well above” what would be consistent with inflation returning to the Fed’s 2 per cent target. Despite evidence that the economy is not cooling as rapidly as expected, the chair this week signalled the Fed would soon reduce the pace at which it is raising interest rates.

The course adjustment from the US central bank comes after it pushed the fed funds rate from 3.75 per cent to 4 per cent, a level that will more forcefully curb activity.

Powell made clear that a slower pace will not mean an easing up of the fight against inflation, however, with the chair warning that the policy rate would reach higher levels than expected. Markets have now priced in a half-point rate rise in December and fed funds rate peaking at around 5 per cent in early 2023.

A higher so-called “terminal” rate further reduces the odds the Fed can avoid tipping the economy into a recession, economists warn, with the unemployment rate likely to rise above 5 per cent eventually.