US to deploy more nuclear-capable warplanes around Korean peninsula The US plans to deploy more nuclear-capable warplanes around the Korean peninsula, in an effort to boost deterrence as North Korea steps up missile launches and prepares for a possible nuclear test.

Speaking at the Pentagon hours after North Korea launched several missiles, including an intercontinental ballistic missile, South Korean defence minister Lee Jong-sup said the US would increase the frequency of deployments of nuclear-capable assets to the Korean peninsula.

At a news conference with US defence secretary Lloyd Austin, Lee said Austin had pledged to respond to Pyongyang’s provocations by “employing US strategic assets to the level equivalent to constant deployment through increasing the frequency and intensity of strategic asset deployment in and around the Korean peninsula”.

Austin stressed that the Pentagon would not station new nuclear-capable assets on a permanent basis in South Korea, but he said they would “move in and out on a routine basis”.

Austin said the US had recently redeployed fifth-generation nuclear-capable fighter jets to South Korea. He also noted that the USS Ronald Reagan aircraft carrier strike group recently made its first port call in five years to South Korea, which “sends a pretty strong signal as well”.

The defence chiefs warned Pyongyang that any nuclear attack on the US or South Korea would result in “the end” of the Kim Jong Un regime. The threat echoed new language that the US included in its recently released nuclear posture review.

Victor Cha, a North Korea expert at Georgetown University, said that while the language of the warning and the NPR did not suggest a new policy, it was “much more explicit” than previous warnings from Washington and Seoul.

Cha said it was intended to boost “extended deterrence” — where the US helps deter attacks on allies by stating its commitment to their defence and uses aircraft, ships and other weapons to stress the point.

Cha added that the NPR included language that suggested the US could use a nuclear weapon against North Korea if the country engaged in “opportunistic aggression” during a period when the US was involved in a large-scale confrontation with a major power.

The military show of force from North Korea on Thursday came one day after the most intense series of launches in its history. On Wednesday, Pyongyang fired at least 23 missiles and 100 artillery shells west into the Yellow Sea and east into the Sea of Japan. 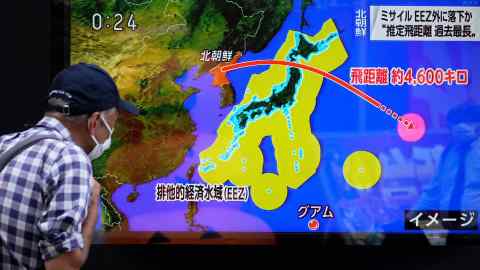 North Korea has fired more missiles within a 24-hour period this week than during the whole of 2017, when it last conducted a nuclear test.

South Korea responded by firing three air-to-surface missiles into waters north of a disputed maritime boundary between the nations.

Austin slammed North Korea for conducting what he described as an “illegal and destabilising launch of an intercontinental ballistic missile”.

There was confusion on Thursday morning in the region about the flight path of the ICBM, which South Korea assessed to have failed in flight.

The Japanese prime minister’s office initially condemned North Korea for flying the missile over its territory, but defence minister Yasukazu Hamada later said that it had not flown over Japan.

There is rising concern in Washington, Seoul and Tokyo that North Korea is preparing to carry out a seventh nuclear test. Efforts to engage North Korea have had no success, with Pyongyang refusing to even respond to outreach from Washington and Seoul.

At the news conference, Austin stressed that the US had an “ironclad” commitment to defend South Korea and other allies. He said the military was upping its readiness in response to the growing threat.